Posted on January 9, 2015 by orlandobands

The Revoutioners Interview
The Revolutioners are a unique and enthusiastic band from Little Rock, Arkansas. They give a must see live entertaining performance. After sitting down with Scott from Saving Abel I was able to catch up with frontman Paul Houston from The Revolutioners and this is what he had to say:

OB: How long have you been on tour with Saving Abel?
PH: About two and a half weeks. We just got signed to their label, Tennessee Whiskey Records, it’s very brand new, they just released their album out on it along with a sampler CD and we’re on that as well. We had two shows with Saving Abel one in Little Rock and one in Fort Smith and a guy named Rick Skinner worked really hard to get us on those bills he works for Screamin Toe Productions and as we facilitated the gigs he got to get direct support and we kicked ass both nights, put enough CD’s in their hands and I got a phone call two months later out of the blue, sort of.

OB: How did you come up with the name The Revolutioners?
PH: Well, cause all the other good shit was taken I guess. It’s like you go to the internet, and check, is this band taken, yes, is this band taken, yes…Fuck they all are taken. But, we were called the New Passengers and there was a band that had that and we were like good grief. Ben the guitar player came up with it, it’s an old word that hasn’t been used you can look it up in Webster and it’s not going to exist but it’s like and old 17th century word from what I’m to understand that doesn’t get used much anymore, so, we resurrected that thing I suppose.

OB: So, how did you guys get together?
PH: Well, all those guys on stage, except for Danny the bass player we recruited him from another band, but the guitar player, Jackson, the guitar player Ben and then the Lance the drummer, they were from a band called Highway Five and they were an alternative country band, really they were just a rock and roll band with a very good country singer and they broke up for whatever reason and they came and found me. I was doing Karaoke back home, that’s how I made my living, and they found me doing that. I had two other bands I was working with. I had a band called Seven Sharp and I also sang for a cover band called the Getty’s so, I had all this stuff going on and they hand me this crudely recorded stuff like what somebody does in their basement, but what I heard in it was something really good. I even tried out for Highway Five after their singer left, because I liked their music, it was good and anyways that didn’t work out and when they decided Highway Five wasn’t going to happen they said here is what we are working on do you like it? I went in with them and listened to it and worked with it, and what you see is what you get. They’re really that good. They’ve been playin’ together for so many years, it’s hard for them to sound bad.

OB: What’s the influence?
PH: Oh my gosh, that’s real easy. Steven Tyler is like my number one guy when I was growing up, but a lot of people say they see a lot of Mick Jagger in me too. In 2002 I went to Memphis in May which is close to Little Rock and Stone Temple Pilots headlined that night I didn’t know much about STP at the time and I was with these two little brunette girls and they took me up to the front and they got me stoned and Stone Temple Pilots came on and opened with Shine on Me You Crazy Diamond and I sat there and got the best education of my life and Scott Weiland was my teacher, and I knew at that moment that’s what I wanted to do. I had been singing in bands, but not the way this guy moves, and not the way he controls it. It’s the way he owns it up there, I model some of that stuff, he was just a big influence. Some Steven Tyler, Scott Weiland, Mick Jagger somethin. 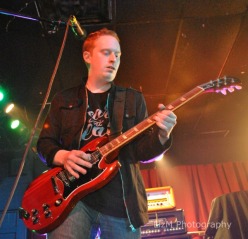 OB: What was the deciding factor in signing with Tennessee Whiskey?
PH: Well, what the fuck else are we gonna do right? They offered us enough dates and they didn’t want a whole bunch of money from us at all like royalties or anything like that they just wanted a percentage of the sales and we felt like it was legit, and we can walk away in a few years if we want to and we aren’t bound to playing with Saving Abel only. It’s a big step in the right direction all the people we’ve met in the short amount of time is good for networking. So, our job is to get on stage and try to kick everybody’s ass for the most part. I try to make it as difficult as possible for anybody to follow me. Scotty Austin the Lead singer of Saving Able had a great quote. He said “it’s your job to go out there and kick my ass every night , and it’s my job to make sure that shit doesn’t happen.”

OB: What has the label done for your band?
PH: oh gosh, promotion, promotion, promotion, our likes have sky rocketed on facebook, they are going to put us out in front of Saving Abel a lot tonight’s show is a strange location, but some of these shows are big where you got a few hundred people in front of you and that’s great. We sell a lot of merch, as a matter of fact we are almost sold out, as a matter of fact I have two more dates to do and I am out of almost everything. They’re not paying us out any money, we have to get out here and make sure we are selling merch every night

OB: What is the most memorable moment since you have been on tour?
PH: We were in Lafayette and we just played a place called the Z Club and we crashed that night in the parking lot on the bus with the generators running and the damn carbon monoxide, we have to take the generators out cause the carbon monoxide keeps going off, and my mom was like “did you get a carbon monoxide detector” Yes mom we got a carbon monoxide detector. Next thing you hear beeeeppbeeepebeep, at like 4 o’clock in the morning, we’re gonna fucking die. Between the carbon monoxide detector going off, can’t get any sleep, we’re all thinking we’re gonna die, I get up at like 6:30 cause I can’t sleep, and that damn bus never moves until at least 10 maybe 9 at the earliest depending on how long the drive is the next day and there’s this café right there and it was closed when we got there. So, I got up and I went over there to eat and I had coffee, and Cajun hash browns and it was lovely and wonderful and I was watching CNN just getting away from everybody which was nice. I got my coffee to go and I go back to the bus, only there is no bus, there’s no bus. The bus had already left, and there’s a scene from almost famous where Jason Leigh walks out of the bathroom and they’ve already taken off. Hey don’t worry about me; I’m just the fuckin lead singer. So I took a picture and said this is where the bus was, and I posted that to facebook. It got like a 150 likes, 75 comments, which was good for me because I have a very narrow scope of facebook friends. But yeah, I got left.

OB: How long did it take for them to come back for you?
PH: I called them, it took them about 30-40 minutes to come back and get me. Good thing I had my cell phone, if not then what?

Thank you Paul Houston for taking the time to talk with Scene and Heard with LizM of Orlandobands.com, I wish you luck with the new label Tennessee Whiskey and with your tour. Don’t forget the next time you get off the bus, leave a note.

OrlandoBands.com was founded on the idea of positive change for the music and media industry. The way Entertainment is established is changing rapidly. Artist now have more power to expose themselves in new and effective ways. Our mission is to help find positive, simple and effective solutions to help artists gain attention. Through our free services on OrlandoBands.com and our ever growing marketing campaigns we have been able to establish actions that work. If you are located in the Florida area and would like to take advantage we encourage you to register with us today. Please feel free to contact us with any questions or concerns you may have.
View all posts by orlandobands →
This entry was posted in Past Authors. Bookmark the permalink.